100 years of building and fixing

Steve Escoabr, a machinist at Pasco Machine, welds together a special roller designed to clear off conveyor belts.

After quickly programming the computer numeric control (CNC) milling machine, Brandon Gervais watches as it starts to mill a roller wheel, a custom order for a customer.

Pasco Machine machinist Gary Flansburg mills a spout designed to fill wine bottles. Flansburg, a 19-year veteran of Pasco Machine, said he was making 100 of them.

Previous Next
by CHARLES H. FEATHERSTONE
For the Basin Business Journal | October 27, 2020 1:00 AM

PASCO — According to Washington State University’s Cooperative Extension services, there are 1.8 million acres of irrigated farmland in the state of Washington.

Most of that — 75 percent — is drawn from the state’s two major river systems, the Snake and the Columbia, and it means a lot of pivots, a lot of sprinklers, and miles and miles of canals and ditches and pipes.

And pumps. An awful lot of pumps.

When they break — and they do break — especially in the middle of irrigation season, a farmer who irrigates any amount of acres cannot afford to have those pumps out of commission for any great length of time.

Or you oversee a production line at a busy food processor — in addition to everything else, there are a whole lot of pumps in food processing plants — and a machine goes down, bringing production to a halt and leaving 300 workers to stand around doing nothing.

Who do you call to get something like that fixed quickly and well? Fixed like your life and livelihood depend on it?

“We refer to ourselves as the ER, emergency room, for machine work,” said Jason Story, co-owner of Pasco Machine with his father Don. “We’re on call.”

Founded in 1921, Pasco Machine is celebrating 100 years of making and fixing things. It has even started up a pump shop, to specialize in pumps big and small, and can turn them around in about 24 hours if necessary.

“To the best of my knowledge, we’re the only machine shop in the Tri-Cities that has 24-hour, 365-day-per-year service,” said Rick Perez, the general manager of Pasco Machine Co. in Pasco. “So if you call, and it’s Super Bowl Sunday, at 1:30 in the afternoon, somebody’s on call. And they go.”

“They’d be really pissed off,” added company co-owner Jason Story. “But we’ll be down there,” finished Kelly Davenport, one of three outside sales territory managers for Pasco Machine. “Everyone’s on call. We’re all attached to phones.”

The Story family has owned Pasco Machine, located at 518 W. Columbia St., near downtown Pasco, for the last 30 years or so, when Don Story came to the company as an outside sales representative in 1983.

“It was something that I was attracted to, working on things and making things work and building things,” Don Story said. “I’m not a machinist, even though I like building things.”

Over the last decade, Jason has overseen the expansion of the company’s capabilities, adding computer-controlled lathes and mills, a giant water jet to cut metal parts, and building an entire shop dedicated to tearing down and rebuilding pumps.

It means the company can do nearly any kind of job, from one-off custom fabrication work to small batches of specialized equipment. For example, on the Wednesday the Basin Business Journal visited Pasco Machine, employees were welding a custom-designed catwalk to go around a giant metal tank, several metal rollers designed to clear off conveyor belts, implements designed to push potato chip bags into boxes for shipping, and very specialized spouts to fill wine bottles.

But Pasco Machine likes to tout “The Pump Shop,” and its expertise in repairing pumps great and small.

All of the in-house work makes it possible for Pasco Machine to control every step of the pump repair process. It keeps costs down, Jason said, and it also allows Pasco Machine to do a few things on its own — such as spraying ceramic on a rotating pump shaft to improve both performance and durability — as well as some “extreme” repairs.

“Which is unheard of,” Davenport said.

“We’ve done it in 24 hours many times,” added Chase Dailey, one of the company’s outside sales territory managers.

Unlike his father, Jason started out as an apprentice, learning all aspects of the business from running machines to doing outside sales. It’s important to Pasco Machine that its salespeople have technical expertise and know their clients’ businesses: the machinery they use, how they use it, and what they might want to do with it in the future.

In fact, Jason described them more as “applications engineers” rather than simply salespeople.

“We have three guys that go out, they have territories, and they’re going into the plants,” Jason said. “I just think of them more as problem solvers for these plants. Plant managers come to us with a problem and we come up with solutions.”

“You wear a lot of hats in the sales position. You’re an inventor, you’re a problem solver, a lot of different things. You’re not really selling a part,” Daily said. “You go in and they tell you what problem they have. This machine does this now, but we want it to do this, and you figure out how to get it there.”

General Manager Perez came to Pasco Machine from Lamb Weston, where he oversaw production and called upon Pasco Machine’s help regularly and repeatedly.

“We always came to Pasco Machine,” he said.

With the end of the irrigation season approaching, Jason said the company is getting ready for its busy season, when it will tear down and rebuild around 150 pumps in four months, most of them used in irrigation. The biggest draw water directly from either the Columbia or Snake rivers to irrigate thousands of acres.

“Water goes off at the end of October and they turn it back on by March 1, so everybody wants their stuff back by March 1,” Jason said.

If Pasco Machine is having any difficulties, it is finding skilled machinists. More than a few of the company’s employees, like Chase Dailey, started out sweeping up or working in the office before apprenticing on the mills, lathes and computer numerical control (CNC) units and eventually gaining the skills to do the work.

“I’ve been here 16 years, and all of it pretty much came with on-the-job training,” said Brandon Gervais, 33, after quickly programming a giant CNC milling machine. “I didn’t go to school for any of it. I took some classes here and there for the programming, but a lot of it is self-taught, kind of trial and error on the machines.”

Jason said the company has actually developed a curriculum to train future machinists and has plans to build its own school — complete with its own machines and at least one classroom.

“It’s totally an in-house thing,” Jason said. “Because it’s so difficult to find machinists now, especially people who are doing what we do.”

It’s part of the company’s mission and purpose — to build things or repair them quickly and well. It keeps people coming back, Jason said, and he’s grateful for all the loyal customers the company has had over the years.

“Our customers are very loyal,” he said. “They’re just good people. Great people to work with.”

“Pasco Machine has had good leadership, and we’ve understood the essence of urgency,” Davenport said. “If somebody says, hey, it’s really important, we got it done.” 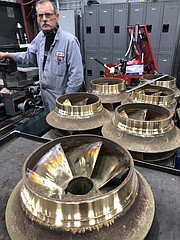 Pasco Machine machinist Gary Flansburg mills a spout designed to fill wine bottles. Flansburg, a 19-year veteran of Pasco Machine, said he was making 100 of them. 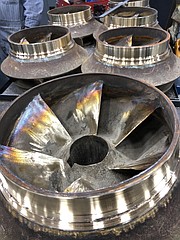 After quickly programming the computer numeric control (CNC) milling machine, Brandon Gervais watches as it starts to mill a roller wheel, a custom order for a customer. 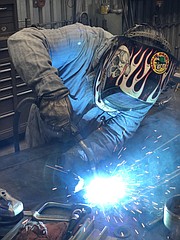 Steve Escoabr, a machinist at Pasco Machine, welds together a special roller designed to clear off conveyor belts.