A SmartSpud in a small pile of potatoes.

Data from the SmartSpud as aaggrrii Chief Operations Officer Larry Doherty bounces it on his kitchen table.

Previous Next
by CHARLES H. FEATHERSTONE
For the Basin Business Journal | January 25, 2021 1:00 AM

MONCTON, New Brunswick — Potatoes are actually very sensitive and can bruise quite easily.

Whether it’s shatter bruising, when the skin of the potato is torn, or blackspot bruising inside, rough handling during harvesting, storage and processing can damage potatoes, making them partly or completely unusable.

And that costs money.

Canadian agricultural technology firm aaggrrii has a solution to that — the SmartSpud, a small, plastic electronic potato filled with sensors that record and broadcast velocity and impact data in real time, giving potato farmers and processors some idea of how their equipment is handling their tubers.

According to Larry Doherty, chief operating officer for aaggrrii, the SmartSpud contains a set of accelerometers that take upward of 50,000 measurements per second and can broadcast them to a tablet or computer via Bluetooth as far as 300 feet away.

The idea is to measure how fast and how much force a potato is experiencing anywhere from the field to right before it’s sliced, diced and turned into potato chips or french fries.

“It’s speaking to the tablet in real time, generating data in real time, like a miniature heartbeat monitor,” Doherty said. “It’s all customizable by the customer depending on the variety of the potato for quick digital reference about what is causing concern and when in the process in order to make adjustments.”

The SmartSpud is powered by a rechargeable lithium-ion battery, which can last eight hours under normal use, and around 19 hours if the SmartSpud puts itself into low-energy mode, still collecting data but not transmitting. It’s waterproof, is turned on by a magnetic switch to ensure there are no moving parts on the outside, and the most recent version has a speaker and can emit a loud buzzing sound to make the brightly colored plastic potato easier to find in a pile or on a conveyor belt.

“If you lose sight of it, it can be hard to see,” Doherty said. “It’s really durable. The only way to take it out of action is to run it through a shredder or a chipper.”

Doherty said the SmartSpud also has the ability to measure temperature and humidity, but there’s not been much call from potential customers for that data and there are still issues with getting the actual sensors on the outside of the SmartSpud without compromising the unit’s durability.

It all ties to a custom app designed to run on the Microsoft Surface tablet or a web app that will display sensor data in real time, allowing users to note places and events as the SmartSpud moves. The company even has beacons that can be set up at various points during processing that will tell the SmartSpud where it is.

And it’s all fully customizable and upgradeable, Doherty said.

The software and the hardware were all developed in Canada, Doherty said.

“It’s all done here, and we’re pretty proud of that,” he said.

Doherty said SmartSpud users include some of the biggest names in the business, including Lamb Weston and Florenceville, New Brunswick-based McCain Foods.

But they haven’t stopped there. Engineers at aaggrrii — owned by Canadian technology firm Masitek, which also owns mmaazz, a company that designs sensors for packaging to prevent breakage — have also designed and sell CracklessEgg and ProduceQC, both of which are similar in purpose to the SmartSpud.

In fact, Doherty said aaggrrii sold some of the ProduceQC units to a large apple grower in Michigan who has used the product to reduce bruising and damage as apples are harvested and moved to storage, or from storage to the processor.

It’s something Doherty said he’d like to see more of.

“It’s a win-win situation for the growers so they can get higher yield,” he said.

Data from the SmartSpud as aaggrrii Chief Operations Officer Larry Doherty bounces it on his kitchen table. 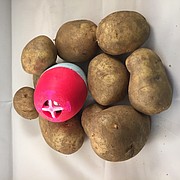 A SmartSpud in a small pile of potatoes.