Testing for the best hay

An "excellent stand" of alfalfa growing just north of Pasco.

Washington State University Extension researcher and forage specialist Steven Norberg, who is clearly not ready to work in an alfalfa field in this photo.

“I run nine experiments every year at two locations,” the Washington State University researcher and specialist on forage and irrigated crops said. “Each (planting) goes three years. I start one every year and end one every year.”

“And I’ve got other research that I’m doing too,” Norberg added.

But it’s the alfalfa research Norberg has been doing for the Washington State Hay Growers Association since the Nebraska native arrived at WSU in 2011 that is the focus of so many people’s interest.

“About 18 different private seed companies submit seeds to me, I grow them, and we look at the results from an unbiased perspective,” Norberg said.

Norberg explained each trial lasts three years, and he plants a new trial and harvests an old trial every year at fields near Pasco and Othello, looking at each cutting for protein, moisture and fat content, as well as overall calories and yield per acre. He grows patented alfalfa varieties, Roundup Ready varieties, and a few older varieties in the public domain to compare.

“I run the trials for three years and I always encourage farmers to look at the three-year data before looking at anything else,” he said. “One year data may be like a race horse, but you need something that will last three years.”

The goal of the tests, Norberg said, is to identify varieties of alfalfa that are well-adapted to the Columbia Basin, its pests and climate that will still yield well. All test fields are planted the same — 22 pounds of seed per acre spaced six inches apart in plots 4 by 15 feet.

A good yield will be more than 100% of the mean for a three-year trial Norberg said, though yield itself is only one part of the picture.

Dairy cattle usually get the first cutting of alfalfa hay, which in Norberg’s trials in 2020 was on May 7 for the Pasco fields and May 20 for the Othello fields. As is the last cutting of the year, he said. In Othello, the test plots were only cut four times, the last being on Aug. 12, while both sets of Pasco plots were cut five times, with the last cut done on Sept. 11.

“The growing season is shorter in Othello than Pasco, farmers traditionally only get four cuts in Othello, but sometimes I get five, but it is pushing it,” Norberg said.

Because of that, on average, the Pasco plots yielded two tons per acre more alfalfa hay than the Othello plots because of extra cutting in September.

“Dairy cows have to have high-quality hay,” Norberg said. “Feeding to beef cattle doesn’t require such high-quality feed. But your dairy cow is a finely-tuned animal for milk production.”

However, a fair amount of first-cutting alfalfa hay from the Columbia Basin is also exported from the ports of Seattle-Tacoma and even as far away as Long Beach, Calif., to cattle feeders in Asia, Norberg said.

According to the U.S. Department of Agriculture, U.S. farmers exported 2.6 million metric tons of alfalfa hay in 2017. In fact, Norberg said hay is what fills up so many of those shipping containers that alight in U.S. ports containing consumer goods and other manufactures made in Asian factories.

“In the U.S., alfalfa hay is the third-largest commodity by dollars of any commodity, following corn and soybeans,” he said.

Which is why the work he does on improving hay quality is so important to hay farmers and the Washington Haygrowers Association, Norberg said.

“We’re well supplied with irrigation water, so irrigating to four acre-feet in a season is no problem,” Norberg said. “You can’t do that in Colorado.”

“This is a blessed area. People that have been here forever don’t know how fortunate they are to have the water supply they’ve got. And I hope we never lose it,” he said. “We have to be very careful we never lose it.”

An "excellent stand" of alfalfa growing just north of Pasco. 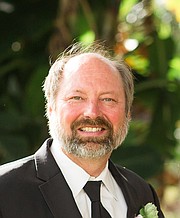 Washington State University Extension researcher and forage specialist Steven Norberg, who is clearly not ready to work in an alfalfa field in this photo.

WSDA RSS Newsfeed
WSDA grant program offers help to qualifying ag businesses
2021-04-05
The Washington State Department of Agriculture (WSDA) is offering grants to small agriculture-related businesses in sectors that have suffered economically due to the coronavirus pandemic, but have been left out of earlier relief programs.
Public’s help needed to detect destructive, invasive beetle
2021-03-18
The Washington State Department of Agriculture (WSDA) is asking the public to report any sightings of Japanese beetle, an invasive and highly destructive pest, and will be hosting an educational webinar about the beetles in April.
US and Canadian entomologists make plans for 2021 Asian giant hornet season
2021-03-15
In 2021, Washington, British Columbia, and U.S. federal agencies are collaborating their plans to track, trap and eradicate Asian giant hornets.
New documentary details WSDA’s hunt for the Asian giant hornet
2021-02-16
Last fall, a production crew spent six weeks in Washington filming beekeepers, researchers, and WSDA staff for the documentary. The 90-minute production, “Attack of the murder hornets,” becomes available to stream Feb. 20 via Discovery+, a subscription-based channel.
State veterinarian alerts poultry flock owners to potential avian influenza threat
2021-02-08
WSDA will offer a free webinar to help poultry owners protect their birds from avian influenza as cases continue to increase worldwide.