Truck driver Theron Wood checks to see that the 32-ton load of palm fat he is hauling from Tacoma to Caldwell, Idaho, is properly secured to his truck.
Charles H. Featherstone/Basin Business Journal

Theron Wood, a truck driver with TL Trucking out of Pasco, prepares to clean the ice off the rearview mirrors of the 1999 Kenworth W900L semi-tractor trailer not far from the junction of S.R. 26 and I-90. Wood had to stop several times on the eastern side of Snoqualmie Pass to clean the ice off his mirrors. “Heated mirrors don’t seem to help,” he said.

Theron Wood, a truck driver with TL Trucking in Pasco, tosses a tiedown over a stack of one-totes of Malaysian palm fat.

Truck driver Theron Wood uses a crowbar to tighten the straps securing a load of palm fat to the back of his big rig.

Previous Next
by CHARLES H. FEATHERSTONE
For the Basin Business Journal | December 28, 2022 1:00 AM

FIFE — Theron Wood stands in a fenced-in parking lot at the end of a narrow cul-de-sac not far from the Port of Tacoma.

He’s watching a pair of forklift drivers load 32 tons of palm fat — 64,000 pounds in one-ton totes — on the back of a pair of flatbed trailers hooked up to his semi-tractor. The 25-year-old has been driving for a year as a professional driver for TL Trucking in Pasco, and the parking lot of Global Agri Trade is now a regular stop for him.

But it’s a bit of a difficult stop. The street is narrow, short and poorly maintained — crumbling at the shoulders — and would be a tight fit for any big vehicle, much less a semi-truck pulling nearly 70 feet of trailers.

“If I go any farther down that road,” Wood said as he neared the Global Agri Trade entrance, “I’ll need to call a tow truck to get out.”

The forklift drivers do their work quickly and efficiently — the totes were lined up before Wood arrived — and make sure they are centered and balanced evenly on both his 40-foot front and the 24 rear trailers. It’s illegal, in fact, to haul a lopsided load, Wood noted, as that makes a truck more difficult and dangerous to steer and stop.

Altogether, Wood said his rig and loaded trailers will weigh around 52 tons. That’s very close to the limit he’s allowed to haul.

“I have hauled everything from drywall to finished lumber, unfinished lumber, fence posts, eggs, and glass jars for a company owned by a friend of mine,” since getting his commercial driver’s license a year ago, Wood said. “Now that I’m with these dispatchers, I haul a lot of hay and palm fat, stuff that goes into cattle feed.”

The palm fat — sold by Global Agri Trade under the brand name Nurisol — is one of several palm and coconut oil products from Maylasia the company sells as additives for animal feed as well as for industrial uses, such as soap making, according to the Global Agri Trade website. Wood is hauling this batch to Caldwell, Idaho, where it will be added to cattle feed.

“And then I’m going to be hauling cattle feed that’s already mixed,” he added.

Wood is one of roughly 3.5 million truck drivers employed nationwide that hauled around 11 billion tons in 2021, roughly 72% of the nation’s freight, according to data published by the American Trucking Association, the industry’s Washington, D.C.-based lobbying group. He’s one of two drivers working two trucks for Taylor Lynch, owner of TL Trucking.

TL, which Lynch started roughly six months ago to complement the family’s farming operations, is among the vast majority of U.S. trucking companies — around 96% — that run 10 or few trucks, the ATA reports.

“I grew up in the Pasco area with my parents, and agriculture is mainly what we do,” Lynch said. “We have a lot of hay and some asparagus. … And because of the hay, I realized that we had a need for hauling hay.”

Lynch himself is not yet a driver — he’s still working on obtaining his commercial driver’s license — and explained that the biggest issues he faces running a trucking company are fuel costs and an industrywide shortage of drivers.

“We’re just keeping our head above water because I’ve got to pay the drivers, and then you have to pay for diesel on top of that,” Lynch said. “Our truckers make up our backbone, and without the guys inside the truck, we wouldn’t be, that’s for sure.”

According to the Energy Information Administration, which tracks the movement, prices and stockpiles of crude oil and refined petroleum products in the United States, the average price for diesel fuel in the EIA’s Petroleum Area Distribution District 5 (which covers the West Coast states of Washington, Oregon, California, Nevada, Arizona, Alaska and Hawaii) minus California has fallen almost 60 cents per gallon to $4.87 from $5.41 in mid-November.

At the Love’s Truck Stop on Port of Tacoma Road where Wood stopped to fuel up and weigh his truck after picking up the load of palm fat, the total fuel bill still comes to around $700.

“That adds up really fast,” Lynch explained. “And typically we don’t get paid until a month or two after. So it’s all cash flow, and managing that is pretty big.”

Lynch, however, said the driver shortage hasn’t affected his company’s operations yet. TL Trucking is small, and he’s been able to hire people by word of mouth.

“Things just kind of fell into place,” he said. “For other companies looking to hire 10, 20 drivers, it can be really hard to find drivers. I’m only looking for one occasionally, because I’m just starting up and growing, so it wasn’t too hard.”

Once he got his CDL, Wood said he didn’t have any problem finding work, but explained that rather than a shortage of drivers, there’s a great deal of concern about a looming wave of older drivers retiring that could make for a severe shortage in the future.

“It’s scaring some people,” Wood said. “Because there’s somewhere of a recession, at least in Washington, for flatbed work. So we got pretty lucky getting this route. And it’s constant because some of the flatbed (hauling) stuff has been harder for a few of the dispatchers we’ve worked with.”

Big Bend Community College offers a five-week-long CDL program for six students twice a semester year-round, according to Julie Gamboa, the program’s coordinator. Demand for truck drivers remains high, Gamboa said, with a mix of companies looking for both long-haul and local drivers.

“We have quite a few that will call looking for drivers,” Gamboa said. “They want to come in and make presentations and speak to students.”

While Wood said he likes being on the road and has learned a lot about the route from Pasco to Tacoma to Caldwell and back to Pasco, noting that he’s driving it so much he knows every bump on I-90. However, Wood added that even with the familiarity, the work is hardly routine. Not when you’re hauling 30 tons of hay or processed palm oil on a crowded, fast-moving interstate.

“You have to pay attention or something bad is going to happen,” he said. “Also, nothing ever goes according to plan. Nothing. There’s always something that you might have to adjust here and there.”

For example, Wood has to stop several times during his trip along S.R. 26 from Othello to the I-90 interchange to clean the ice of his rearview mirrors. Freezing fog, however, is the worst problem Wood dealt with on this trip. It was cold but Snoqualmie Pass was clear and now new snow fell anywhere on his route.

“At least we didn’t have to chain up,” he said.

Every delay runs the clock on the federally mandated 60-hour work week for truck drivers, Wood said, a work week that means he isn’t home as often as he would like and sometimes simply isn’t long enough to get everything done that needs to be done.

“It can eat into your 60 hours real quick,” he said. “Sometimes I can’t stop for lunch for very long, and sometimes I don’t have enough time to get home and I’m stuck someplace for the weekend.”

There’s tremendous incentive among dispatchers, drivers and trucking companies to cheat on work hours, Wood said, because drivers who fudge their hours can haul more cargo, appear more productive and make their employers more money. In fact, Wood said a previous dispatcher ran him out of hours while he was driving his big rig through the middle of Seattle, forcing him to pull off the road and find a place to stay.

“If you don’t tell them no, they will run you hard,” Wood said.

“It’s not a question of if there’s going to be problems, it’s a question of when and what kind of problems they are,” Lynch added. “It could be anything from a tire goes flat to it’s really cold outside and the truck won’t start. … And that’s when you kind of grit your teeth and start fixing things.”

Even with the difficulties, everything from bad weather to mechanical problems to a long list of federal and state regulations, Lynch is hoping to expand his operations, to haul more alfalfa and timothy hay, and even palm fat. Doing his tiny part in moving the region’s goods.

“We’re basically learning what swimming’s like in the big pond, what it’s like in the business life,” he said. “It’s hard work, admittedly, but you know, making a living never came easy. So it needs to be done.”

Truck driver Theron Wood uses a crowbar to tighten the straps securing a load of palm fat to the back of his big rig. 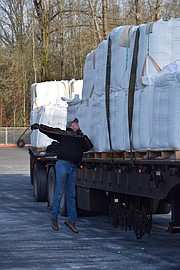 Theron Wood, a truck driver with TL Trucking in Pasco, tosses a tiedown over a stack of one-totes of Malaysian palm fat.

Theron Wood, a truck driver with TL Trucking out of Pasco, prepares to clean the ice off the rearview mirrors of the 1999 Kenworth W900L semi-tractor trailer not far from the junction of S.R. 26 and I-90. Wood had to stop several times on the eastern side of Snoqualmie Pass to clean the ice off his mirrors. “Heated mirrors don’t seem to help,” he said.